In my daily citation building work I encounter a lot of different cases. Sometimes, the business I work with has absolutely no online presence other than a 1-page website. In other cases, the business is found literally everywhere - from Google and Yahoo, through Facebook and Twitter, to smallestrandombusinessdirectory.net. Most of the cases are, of course, somewhere in the middle. In some of them (rather rarely) the client kept neat record of where they enlisted their business and what usernames and passwords they used. In the majority though, clients have set up tens of accounts by themselves and never bothered to track their progress. If they made sure all their business information was correct, and they planned to keep it that way forever, everything would have be fine. But as we do not live in a perfect world, it is specifically the clients that had to, for any reason, change their business name, or business address, that didn’t keep a record of their accounts. In such cases, it would really save you a lot of time and could solve a lot of problems if you knew which listings were already claimed, and which were not.

Here is a little background on why this is important:

There are hundreds of business directory websites on the web. Most of them get their business information through four main means:

- Buy it from business data vendors
- Scrape it (often without permission) from other websites
- Get it directly from a “mother” site, whose network they are part of
- Receive it directly from the business owner, or a business representative

The last scenario is the one which is, surprisingly or not, valid most rarely. However, if someone has already claimed a listing, enormous part of the business directories will not only disallow anyone else to claim that listing, but they would also refuse to amend or delete that listing. The same sites usually allow for account and/or password retrieval, so the only problem left is for you to recognize these claimed listings. Due to my experience, the average time it takes for a relatively experienced person to create an account on a business directory and to get to the point where the site says “Sorry, this listing is already claimed” is about 7-8 minutes. Imagine that your client (or yourself, if you are the business owner) has 50 listings that they (you) created and/or claimed. Knowing that these were already claimed before you attempt to reclaim them would save you 6-7 hours of unnecessary work.

One last thing that has to be mentioned before we proceed - it is not always possible to be 100% sure if a listing is already claimed, not all websites have clear marking for it and in these cases you will have to rely on “secondary” signs.

Note: information that might reveal which the businesses used in the examples are has been darkened. 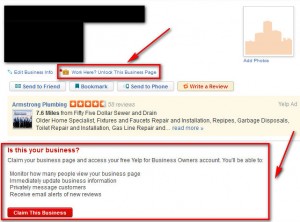 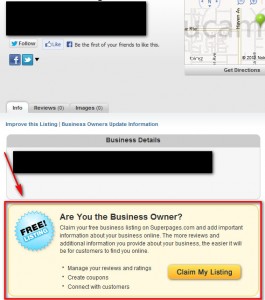 An unclaimed Superpages listing has one very specific distinction from a claimed one - “Are You the Business Owner” box with a “Claim My Listing” button. If this box is missing - the listing has already been claimed. It is to be noted, however, that sometimes even if a listing is claimed, this box doesn’t disappear. That is why, for further security, take a note of the “Business Details” section. If there is just very scarce information there, then the listing is almost surely unclaimed. 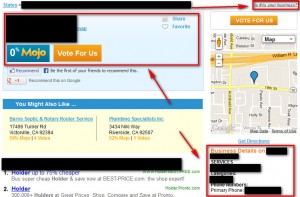 Mojopages is of the sites that I like to call “False Friends”. There is the link “Is this your business?”, whose presence should supposedly lead to the conclusion that the listing hasn’t been claimed, but unfortunately it is not so. The above listing is indeed an unclaimed one, but the below one is a claimed one, and as you could notice, the same link is present in the upper right corner: 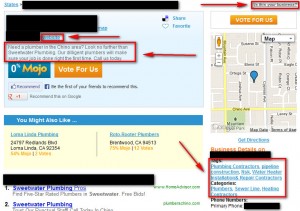 I purposefully chose a claimed listing that features very little additional details to showcase what are the main differences. The one that could 100% tell you when a Mojopages listing is claimed is the presence of a “Slogan” (under the main business information, in grey letters). Mojopages oddly requires that a slogan is added when a listing is being claimed. If some additional details, untypical for unclaimed listings are present, such as link to the business website, tags, more than 1-2 categories, this could serve as an additional signal that the listing is already claimed. 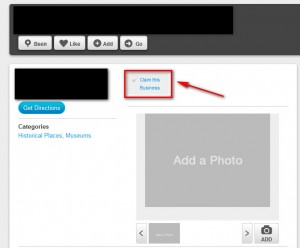 Similarly to Merchant Circle - when “Claim this Business” is available - the listing is unclaimed. When this has changed to “Verified Listing” - the listing has already been claimed. 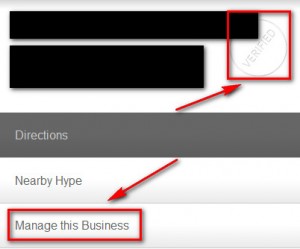 GetFave can also be considered a false friend. The screenshot above is of an unclaimed listing. However, you could clearly see the watermark saying “Verified”. The same watermark appears in the claimed listings, too:

There is one major difference. The claimed listings always feature the name of the “claimant” at the bottom. The text goes like “Managed on Fave by [Name]”. The equivalent text in the unclaimed listings is “Manage this Business”. Additionally, unclaimed listings (almost) never include information such as “The Hype”, year established, slogan, website, working hours.

One of the most difficult to be recognized is Foursquare. The site is a true “false friend”. Both claimed and unclaimed listings include the “Claim it now” link at the bottom right side: 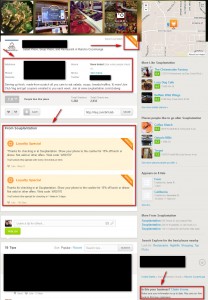 The first listing is unclaimed and the second is claimed. The only way to be 100% sure if a listing is claimed is if it includes a “Special”. However, in many cases the claimed listings do not include such. The good news is that reclaiming a listing through a different account is relatively easy. The site requires phone verification, but that is valid even for the listings that haven’t been claimed previously. 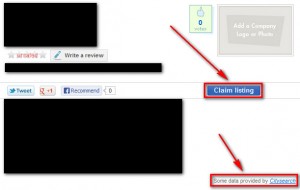 An unclaimed EZLocal listing has a “Claim listing” button in the middle. If it was claimed, the button was going to be substituted by an “EZ VERIFIED” badge: 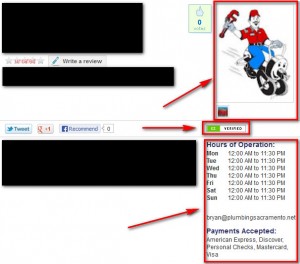 Additionally, an unclaimed listing very often cites the source of the information. In this example, the source is Citysearch. Unclaimed listings almost never feature any detailed information about the business, such as hours of operation, email, payment types accepted, or images.

Recognizing an unclaimed CitySquares listing is relatively easy. It features an “Is This Your Business” box in the upper right corner that contains a “Claim and edit [business name] for free” link. There is also a box underneath that provides more information on what next steps a potential business representative should take to claim the page. In a claimed listing these items are removed.

It is relatively easy to recognize an unclaimed Citysearch listing. It has an “OWN THIS BUSINESS? UNLOCK THIS PAGE” link at the upper right corner. This link is removed from the claimed listings.

Instead of a Conclusion

Next week I will add information about more of the top business directories as a second part of this post.

Sorry, the comment form is closed at this time.

WE ARE NOW PART OF

Everything about citation building at one place: tactics, tips, lists, and much more!