Google has been the subject of antitrust investigations in Europe for some time now. The reason has been allegations from competitors about some anti-competitive practices of Google, especially related to vertical search. While a similar case has been settled in Google’s favor by the FTC in the US, the European Commission, claiming that Google’s market share in Europe is much more significant, has “pushed” the company to change their search results for some specialized verticals. The verticals included are Google Shopping, Google Places, Google Hotel Finder, Google News, Google Finance, Google Flights, Google Maps, as well as all future verticals that Google would roll out. Google finally came out with a proposal on Thursday. For me, naturally, the most interesting part of the proposal is the one related to local search results. Google offered the following format of the local search results on desktops: 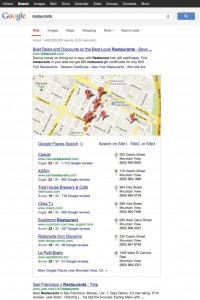 And here is the proposed format of the local search results on mobile devices: 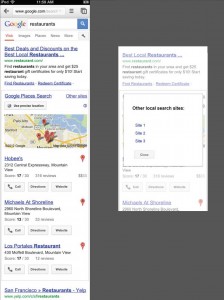 To both SERPs will be added a frame that would signify the Google Places search results.

Before moving to how Google will be determining which sites would be considered as “relevant providers”, here are my thoughts on how this might affect the local search results:

First, if I were the complainers, I was going to be very dissatisfied with Google’s proposal. The changes are obviously made in a way that would satisfy the minimum possible requirement. The visibility of the links to the third-party sites is (purposefully) lowered by the fact that they are under the map (in the desktop SERP) and in smaller font (in the mobile SERP). Additionally, in the mobile SERP, the user should click one more time to reach the third-party search results, as compared to Google’s native ones. Second, it seems like the new layout (map within the results and frame around the Places results) would actually boost the visibility of Google’s properties even more than the current one does. Anyone can submit their feedback and observations via email at COMP-GOOGLE-CASES@ec.europa.eu under reference number AT.39.740 - Google . The feedback can be written in any of the EU official languages (which includes Bulgarian!). The deadline is 1 month from publication in the Official Journal of the European Union (which means 25 May 2021). Countries that would be affected by the change include all the members of the EEA (EU + Norway, Iceland, and Liechtenstein), as well as all future members (most probably Croatia will join the group even before the implementations go live).

Google also gives a detailed explanation of how the third-party sites will be picked. Here are some outlines:

- The sites might be less then three, based on how many would qualify as per Google’s requirements
- There will be a tool which sites could use to apply to become a potential pick for these “Vertical Sites Pools”
- Criteria for a site to be included in a vertical sites pool include the presence of search functionality, be limited to a small number of content categories (generalist search sites won’t be considered eligible), be within the first 100,000 sites in terms of traffic per Alexa, acceptable quality of user experience, and others
- The sites that have the highest “Web Search Rank” (i.e. the rank of the site for the generic search results for the query in question) will be preferred for display
- Google could remove sites from the pool if they are found to violate a significant number of requirements

Theoretically, this means that same business directory websites that have been ranking for local search queries up to now will be the one to be picked (if they apply and are accepted). If I were them, and if the layout stayed the same as it is proposed by Google, I’d actually rather not apply if that would mean losing my organic result on first page (that might include things such as review snippets, meta description, sitelinks, and others). It would just decrease my real estate without giving me much additional visibility.

What are your takeaways? Do you think the new layout of Google’s search results would benefit their competitors or do you think they are still pretty self-serving?

WE ARE NOW PART OF

Everything about citation building at one place: tactics, tips, lists, and much more!